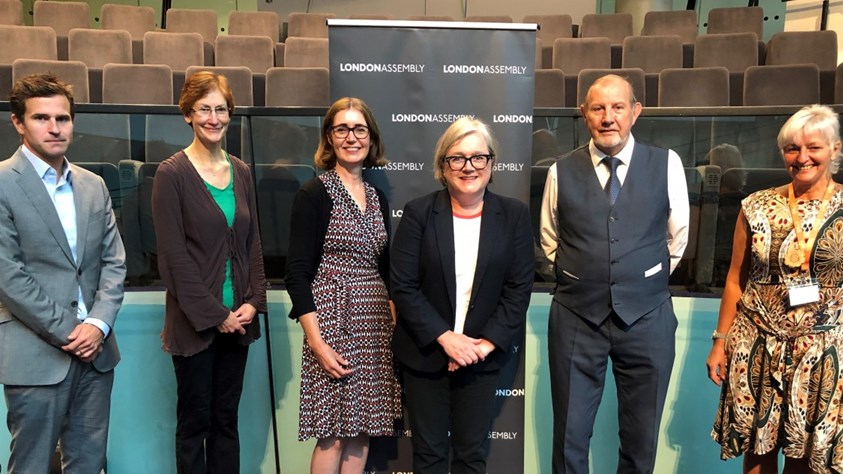 Speaking up about access to public toilets in London

We gave evidence to the London Assembly Health Committee on Tuesday 14 September as part of the Assembly's investigation into the provision of public toilets in London.

The London Assembly holds the Mayor to account, making sure the Mayor's policies, actions and strategies are in the public's interest. They invited Ruth Wakeman, our Director of Services, Advocacy and Evidence to speak on their public toilets investigation panel.

What did we say?

With 1 in 2 people with Crohn's and Colitis having had a negative experience from members of the public for trying to use an accessible toilet, Ruth called for Not Every Disability is Visible signage and an interactive toilet map to be made a requirement across London. Ruth raised important issues about why people struggle to access public toilets. Charges for using toilets, physical barriers to accessing toilets, such as when these are past ticket barriers or turnstiles and the lack of clear information about where toilets are located can be obstacles for people with Crohn's and Colitis and other invisible conditions.

Ruth said that this should not be seen as a "nice to have" but is a public health issue, which is vital to ensuring social inclusion and equality. Toilet provision should be included in the Mayor's London Health Inequalities Strategy and the law should be changed so that local authorities have a duty to ensure that there are enough public toilets that meets the needs of their whole community.

Londoners: We want to hear from you! The London Assembly is investigating the provision of public toilets in #London. Take our short survey and let us know what needs to improve. London Assembly (@LondonAssembly)

Who was on the panel?

Also on the panel were representatives from Transport for London, the British Toilet Association, Changing Places and Richmond Borough Council. Mark Evers from Transport for London said that an audit of the number of toilets across the network is currently being undertaken and there is potential for more staff training to improve understanding of why people might need access to different types of toilets.

Councillor Julia Neden-Watts talked about the Community Toilet Scheme in Richmond which enables local businesses like pubs, restaurants and shops, to work together with the council to make more clean, safe and accessible toilets available to the public. There are now nearly 70 premises taking part in the scheme in Richmond. It was recognised that schemes like this should be complementary to, rather than instead of council-run public toilet provision, to always ensure appropriate access.

The London Assembly will be producing a report of their investigation and have developed a survey to gather views to inform this. If you live in or visit London, please share your views here

Over 3,000 venues across the UK have already installed our accessible toilet signs.

Find out more about Not Every Disability is Visible

Catch up on the latest news from Crohn’s & Colitis UK